Thank you all for submitting feedback and bugs! This allowed me to improve the software and here it is: alpha version 2.0.3! This release fixes some bugs and even adds some new stuff. I highly recommend updating to this release (Don’t forget to update the libraries too)! These are the changes:

The biggest change, which you will see immediately, is the new font. I thought it might be nice to have a more readable and clear option. There is a new option for choosing the font so that you can go back to the old one if you like: 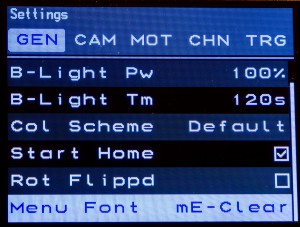 I also started working on a Windows client for creating keyframe-based moves. This is in the very early stages but I hope to be able to release it before the summer. Main focus will be defining the bezier-curve based moves and then either save them as a files or directly submit the data to the USB-connected miniEngine.

…and as always – Have fun!
Airic